Abstract: Objective. Due to the increased parasitic resistance, there is a need to explore alternative insecticides, including natural products, such essential oils. In this sense, the aim of this study was to evaluate, for the first time, the insecticidal and repellent effect of Cinnamomun zeylanicum (free and nanoemulsion forms) in vitro and in vivo. Materials and methods. For that, the insecticidal effect of the free form was tested at 1.0, 5.0 and 10%, while the nanoemulsion form was tested at 0.5, 1.0 and 5.0% against adult house flies, Musca domestica. For validation of the test, the flies were sprayed with the diluent (water and triton 10%) and with blank nanoemulsion (without C. zeylanicum essential oil). Moreover, in vivo test was performed using cows naturally infested with Haemotobia irritans. Results. The results demonstrated that cinnamon oil (10%) and the nanoemulsion (5%) were 100% effective against M. domestica after 90 minutes of exposure. The repellent effect was tested in vivo using 5% of cinnamon oil on Holstein cows naturally infested by Haemotobia irritans. The flies were counted at 0, 1, 2, 3, 9 and 24 h after cinnamon oil treatment. It was verified significant decrease (p<0.05) in the number of flies on cows sprayed with cinnamon in all times. Conclusions. Based on these results, C. zeylanicum showed insecticidal effect (in vitro) against domestic flies and repellent effect (in vivo) against the horn fly.

Ectoparasites are considered one of the most important factors linked to decreased productivity of cattle and other animal species (1). The control of these parasites is usually performed with the use of conventional antiparasitic drugs, however many of them do not exhibit the expected efficacy mainly due to pharmacological resistance (2). In this sense, flies such as Musca domestica are considered important vectors of viral, bacterial, fungal, and parasitic diseases (3). These insects cause great animal discomfort, especially Haemotobia irritans and Stomoxys calcitrans, since they are hematophagous flies (4), which leads to animal stress, decreased milk and/or meat production (5).

Recent reports on fly resistance (2,6) indicated a need to explore alternative insecticides, including natural products, such as phytotherapy and essential oils, in an attempt to develop greater efficiency to control and treat these ectoparasites. Also, the use of natural products may decrease the high costs related to the use of conventional chemicals, as well as reduce detrimental effects on the environment (7).

Essential oils are produced by many plants and have several commercial purposes, and the insecticidal effect (8) was observed using neem oil (9,10), and melaleuca and andiroba oils (11). Cinnamomun zeylanicum is a perennial tree of medium size, native of South Asia belonging to the Lauraceae family, which is acclimatized in other tropical regions of the world (12). The C. zeylanicum is able to inhibit bacterial growth (13), but its effects on flies remains unknown.

The C. zeylanicum essential oil has great antiparasitic potential against a wide number of organisms, including mosquitoes (14). This oil is susceptible to degradation by oxidation or thermal degradation. Also, the presences of volatile and insoluble compounds make its use very difficult in pharmaceutical formulations. In this sense, a viable alternative may be the use of nanotechnology (15), through the development of nanoemulsions that are amphiphilic and non-toxic composed of biodegradable particles of essential oils and surfactant (16). The emulsion acts as a protector of the essential oil, preventing degradation and improving its biodisponibility and biocompatibility (17), leaving the essential oil for longer periods of time adhered to the animal. Thus, the aim of this study was to evaluate the insecticidal and repellent effects of cinnamon oil against flies, as well as if nanotechnology potentiates the effects.

Local. In vitro tests were performed at the Animal Parasitology Research Laboratory of the UDESC West; and in vivo tests at a farm in the west of Santa Catarina, Brazil.

Preparation and characterization of C. zeylanicum nanoemulsion. Cinnamon oil nanoemulsion (n=3) was prepared by the emulsification method under high agitation using Ultra Turrax ® , recently described in details by Volpato et al. (18). For the blank nanoemulsion, the cinnamon oil was replaced by caprylic/capric triglyceride.

In vitro insecticidal effect against Musca domestica. Adult house flies were captured with the help of a net in a property in //Southern Brazil. After the capture, 300 flies were housed in cages and fed with sugar and water up to the test (48 h). Each cage (20 x 20 x 30 cm) was built using a 2-L plastic bottle with an iron frame covered by a thin nylon mesh at one end as described by Klauck et al (11).

Musca domestica flies were separated into groups of twenty insects per group and treated with the free form of C. zeylanicum essential oil and its nanoemulsion form by spraying 100 μL/group at concentrations of 1.0, 5.0 and 10% (free form), and 0.5, 1.0 and 5.0% (nanoemulsion form). A control group was sprayed with distilled water mixed with 10% of triton, in addition to a group with blank nanoemulsion (without C. zeylanicum essential oil). All tests were performed in duplicate.

Insecticidal effect was verified by observing the numbers of dead flies at predetermined times (30, 60, 90, 120, 180 e 240 minutes) after oil and nanoemulsion exposure.

In vivo tests: Haemotobia irritans. In vivo tests were carried out on a farm in the municipality of Jardinópolis, Santa Catarina, Southern Brazil. This property had Holstein and Jersey cows naturally highly infested by H. irritans, with approximately equal number of flies per cow. Two groups of five animals (10 animals) were sprayed with the aid of a hand sprayer, with cinnamon oil at 5% (treated group) and Triton diluted with water (control group). Each animal was treated with 50 mL of solution by spraying on the head, neck and dorsal region of the body (total volume of 250 mL/group). During testing, the animals were maintained in the same field, without separation of cows per group, with free access to water, shade, and pasture. All H. irritans located on the animals were counted before (09:00) and 1, 2, 3, 9, 24 and 33 hours post-treatment. The total number of flies were counted by same observer in both sides of cow (left and right).

Statistical analysis. The experimental data were first analyzed by descriptive statistics for contingency of the information and for further assumptions. The number of dead flies was tested for normality of variance by Shapiro-Wilk test, skewness, kurtosis and homogeneity by Levene’s test (Box 1953). The counts of all cages were transformed by {Log10(x+1)} before variance analysis. Analysis of variance (ANOVA) was considered for each time point of sampling (30, 60, 90, 120, 180, 12, and 240 minutes for M. domestica - in vitro) and (1, 2, 3, 9, 24, and 33 hours for H. irritans - in vivo) as post hoc analysis TukeyHSD was used. It was considered significantly different when p<0.05. The whole statistical process was carried out with R-language, v.2.15.2 (R Development Core Team, 2012). The nanoemulsion treatment containing C. zeylanicum at 0.5 and 1.0% did not differ statistically (p>0.05), showing only 20% of flies mortality. At 5% concentration, fly mortality was 70 and 100% after 30 and 120 minutes of application, respectively (Figure 2B). 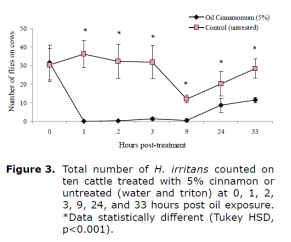 This is the first study that has demonstrated that C. zeylanicum essential oil at 10% concentration is able to kill 100% of M. domestica flies, in addition to its repellent effect against H. irritans flies in cows naturally infested. Also, the nanoemulsion containing the C. zeylanicum essential oil showed insecticidal effect in vitro in all tested concentrations (0.5, 1.0 and 5.0%).

In this study, it was observed a dose dependent insecticidal effect of cinnamon oil against M. domestica, with 100% efficacy at 10%. Although the nanoemulsion containing C. zeylanicum at 5% concentration showed 100% of effectiveness, this promising result was not enhanced through the nanotechnology. According to Ozaki et al (20), the insecticidal effect of the compounds present in the essential oil occurs due to oil penetration into the tissues of the parasite, modifying main physiological functions of the fly. The biological properties of cinnamaldehyde and linalool have been reported in the literature, such as antibacterial, antifungal, antiparasitic, repellent, and insecticidal (21-22), as already demonstrated for the eugenol compound (23). Therefore, these compounds isolated or combined may be responsible for the insecticidal and repellent effect against the flies used in this study, without eliminating the possibility that other component may also exerts these effects.

The insecticidal and repellent effects of C. zeylanicum essential oil against M. domestica and H. irritans were observed for the first time, but the effect of this essential oil was also observed for other flies, such as Ceratitis capitata (Diptera; Tephritidae) (24). Recently, studies have been demonstrated the effects of others essential oil, such as citronella against H. irritans (25), and melaleuca and andiroba oils against H. irritans and Chrysomya megacephala (11). In this present study, the pulverization with C. zeylanicum on infested cows showed positive effects, i.e., the flies were repelled on the first hours after application, showing repellent effect during all experimental period.

Experimental protocol was approved by the Animal Welfare Committee of the State University of Santa Catarina (UDESC) under number 7058050716.

The authors declare that they have no conflict of interest.