Abstract: Teratomas are germ cell neoplasms originated from the ectoderm, mesoderm or endoderm. The dermoid cyst or mature cystic ovarian teratoma is a rare tumor in female-canine, which can cause serious damage to the fertility and health of animals. The present case reports an ovarian cyst as an intraoperative finding in a 5-year-old German Shepherd female dog. The patient presented purulent vaginal discharge during three weeks approximately. The clinical signs associated to ultrasound exam enabled confirming the diagnosis of pyometra, referring the patient to surgical treatment, by performing ovariohysterectomy. After exeresis of ovaries and uterus and at macroscopic inspection were perceived size and coloration abnormalities of the left ovary, finding, after incision, its interior filled by bristles and sebaceous material. The specimen was forwarded to histopathological analysis, confirming the diagnosis of dermoid ovarian cyst. It concludes that the lack of specificity of the primary signs hinds the clinical diagnosis, contributing to incidental findings of this alteration on abdominal surgeries and that the ovariohysterectomy is an effective treatment to this condition.

Ovarian diseases are uncommon in female-canine, but may affect fertility, health or even animal longevity (1). Epidemiological data are still imprecise, but in general, there is a consensus in the literature that ovarian neoplasms in female-canine are extremely uncommon, being considered rare tumors (2,3,4,5,6,7).

There are four ovarian tumor main categories: epithelial; germ cells; specialized ovarian stroma cells and mesenchymal (2). Teratomas are originated in remaining totipotent cells from the embryonic notochord, which are usually located in the ovary or testis. These cells are derived from two or three germ layers, such as ectoderm, mesoderm and endoderm (8). Most teratomas are benign in domestic animals, except for their malignant counterparts that have been rarely reported in female-canine and mares (9).

The clinical diagnosis of ovarian tumors is difficult due to the presentation of vague and nonspecific clinical signs. The largest clinical findings occur as a consequence of the space naturally occupied by the intra-abdominal masses, ascites, metastasis or hormonal dysfunction (1). According to Solango-Gallego and Masserdotti (2), a canine with functional ovarian tumors may present clinical signs secondary to excessive production of estrogens and/or progestogens, including signs such as persistent oestrus, pyometra and bone marrow toxicity. Diagnostic confirmation is done by histogenic classification, due to the embryogenic complexity of the female gonad (10).

Ovariectomy is curative and may be indicated in young patients with early diagnosis and no evidence of metastasis (1,10). Ovarian and uterus excision is the treatment of choice for ovarian teratomas in canine (3), particularly in cases presenting secondary pyometra (1).

This article aims to report an ovarian dermoid cyst, teratogenic neoplasm, as an intraoperative finding in a German shepherd dog.

A 5-year-old female German shepherd dog arrived at the State University of Northern Rio de Janeiro (UENF) Veterinary Hospital reproductive clinic. The keepers complained about a purulent-looking vaginal discharge during approximately three weeks. They did not know the regularity and interval history between the last estral cycles, but reported that the dog regularly shows more than one oestrus per year. Nevertheless, a day before, the animal had not presented any behavioral changes and had been eating normally, but later it began to present episodes of vomiting.

At the clinical examination, the animal was hydrated, with normocorated mucosa, capillary refilling time (CRT) of less than 2 seconds, heart rate (HR) of 120 beats per minute, rectal temperature of 39.6 °C and there was no alteration at abdominal palpation.

The presumptive diagnosis of pyometra was established and ultrasonic examination of the abdominal region was requested. The ultrasonography examination showed enlarged dimensions of the uterus, which presented an irregular contour, with thickened appearance and anechoic content of flocculent appearance, suggestive of mucometra/pyometra. No other changes were observed in the topography of any other abdominal organs.

The animal was referred to ovariohysterectomy (OH) surgery as a matter of urgency and the subsequent presurgical evaluation was carried out by the small animal surgery department at UENF.

The OH procedure was performed in accordance with the conventional methods, with a middle line approach, and there was not intraoperative complications. The animal had a slight increase in the volume of the uterus and the left ovary, the latter with abnormal characteristics of color and consistency, measuring 3.3 x 2.4 cm (Figure 1A, B). The ovary parenchyma was sectioned and a macroscopic inspection was performed, discovering its filling by hairy and sebaceous material (Figure 1C). 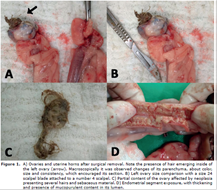 The endometrium had irregular walls, with cystic formations inside, whitish coloration in some spots and greenish in others, besides a mucopurulent content (Figure 1D). The surgical specimen was fixed in 10% formaldehyde buffer solution and sent to the histopathology department at UENF.

The sectional histopathology of the ovarian tumor revealed a teratogenic neoplasm represented by dermoid tissue, with cystoid disposition, filled with corneal material, referring to the histopathological diagnosis of ovarian dermoid cyst (Figures 2 and 3). In addition, uterine sample analysis revealed numerous foci of Ulcerations associated with reepitlization, fibroplasia, angiogenesis, and mixed inflammatory infiltrate extending from the myometrium to the perimeter. The epithelium exhibited different degrees of dysplasia and papillary hyperplasia. This set of observations in the uterine tissue suggested the histopathological diagnosis of endometritis, metritis and myometritis associated with mature granulation tissue. 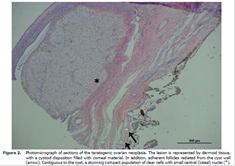 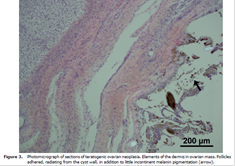 Sixty days after surgery, the tutors reported that the main complaint was resolved and the animal presented no clinical or behavioral changes.

Ovarian neoplasms are uncommon in domestic species, especially in dogs. In accordance with Bertazzolo et al (4) and Diez-Bru et al (7), the ovarian tumors in dogs represent 0.5 to 1.2% from all the tumors. Blaszak et al (3) also reported that ovarian tumors are infrequent and denote 1% of the total of neoplasms of the specie. A wider margin of incidence, of about 0.5 to 6.3% for ovarian tumors, is related by Solango-Gallego and Masserdotti (2). Despite the uncertain information about dermoid ovarian cyst incidence in dogs, the human medical literature, according to Yan et al (11), reports a higher presentation of the dermoid cysts or mature teratogenic neoplasms, representing a 20% of all the ovarian tumors in women with reproductive maturity. Thus, the limited material of the veterinarian literature supports the relevance for this nature of neoplasm report.

Most of the neoplasms are usually presented in senior animals; however, the evaluated patient was only 5 years old. It is explained by Blaszak et al (3), who report a large occurrence of teratomas at 6-year-old female dogs. In accordance with Arlt and Haimerl (1) and Greenlee and Patnaik (12), the average age of teratomas occurrence in female dogs is 4 years. Diez-Bru et al (7) reported a non-specific breeding relation in ovarian neoplasms; however, the German shepherd is highly mentioned at some case reports and retrospective trials (1,4,6,7,12).

The clinical context of this case report is in agreement with the signs described by Solango-Gallego and Masserdotti (2), who report a secondary hormonal dysfunction produced by functional ovary tumors. This data reinforces the established diagnosis of mucometra/pyometra. According to Hagman (13), after the diagnosis of pyometra, surgery should be performed as soon as possible, because a rapid therapeutic intervention is necessary to prevent a fatal case outcome. This urgency characteristic made it impossible to assess the possible presence of germ cell tumors. Thus, it was not viable to conduct other tests like serum level dosage of progesterone and 17-beta-estradiol (14), alfa-fetoprotein and lactate dehydrogenase, as suggested by Farahanni and Datta (15). The Ultrasonography is considered an effective technique to identify ovarian neoplasms (7). However, despite the fact that the left ovary was enlarged relative to the contralateral ovary (Figure 1-A), its non-exorbitant dimensions may have hindered its detection under ultrasonographic examination. Such considerations converge so that the neoplasia diagnosis occurrs incidentally, as reported, during ovariohysterectomy. This may be an important aspect from an epidemiological point of view, since any errors in the clinical diagnosis may contribute to an underestimated casuistry.

Ovarian teratomas in female-canine are commonly benign (3,6,8,9,10,16). According to Blaszak et al (3) and Brum et al (6), malignant metastases can be observed in the abdominal organs, lymph nodes, lungs and bones. There were no metastasis in the case studied. In addition, the histopathological diagnosis also showed benign characteristic of the tumor, with mature and well differentiated cells. Most ovarian neoplasms occur unilaterally (17). The occurrence described in the left ovary is corroborated by Drumond et al (6) and Diez-Bru et al (7), who stated that the left gonad seems to be more frequently affected.

The development of sebaceous material and hair presence filling the ovary parenchyma are justified by the cellular origin of this type of tumor. According to Gülçubuk et al (8), the teratomas originate in cells derived from two or three germinal leaflets, which are the ectoderm, mesoderm and/or endoderm. Therefore, ectodermal structures such as the skin attachments (for example, nails and hair) and mesodermal structures or neural cells (such as bone and cartilaginous tissues, among others) can be found inside this type of tumor.

According to Brum et al (6), in some cases of non-metastatic unilateral teratoma, the bitch may have normal reproductive life and unilateral ovariectomy can be curative in these circumstances. Arlt and Haimerl (1), in a systematic review, described unilateral ovariectomy with surgical removal of the ipsilateral uterine horn as a possibility for treatment and preservation of the reproductive life of the bitch. However, they reiterate that there is still no scientific evidence to provide perspectives on gestation rates and number of puppies expected by adopting this type of management. Ovariohysterectomy has been recommended by several authors (1,3,6,8,10) and it was the treatment of choice in this case due to the secondary occurrence of pyometra. Added to this is the fact that, although there are clinical treatments available for pyometra, which, in theory, would allow the maintenance of the uterus and contralateral ovary, ovariohysterectomy is still the safest and most effective treatment for pyometra (13,18), in addition to the lack of reproductive interest on the part of the tutors.

In conclusion, ovariohysterectomy presents satisfactory results in the treatment of dermoid ovarian cyst in female-canine and the non-specificity of clinical signs and the possible sequence with concomitant diseases secondary to ovarian neoplasia, such as pyometra, contribute to a greater difficulty in clinical diagnosis, which is often performed through incidental findings.