Objective. To determine the effect of environmental factors on litter traits at birth and weaning, and their repeatabilities in four farms in the sub-humid tropics of Mexico. Materials and methods. Data from 46.249 to 50.316 litters for litter size at birth (LSB), number of piglets born alive (NBA), litter weight at birth (LWB), number of piglets weaned (NPW) and litter weight at weaning (LWW) were used. The statistical model for LSB, NBA and LWB included the effects of farm, farrowing year, farrowing season, parity number, simple interactions, random effects of sow and the error term. NPW and LWW were analyzed using the previous model plus the linear and quadratic effects of lactation length (LL). Results. The means for LSB, NBA, LWB, NPW and LWW were 11.7 piglets, 11.0 piglets, 16.1 kg, 10.3 piglets and 61.3 kg, respectively. All effects in the model affected the litter traits. Farrowing year x season interaction was significant for NPW, LWB and LWW. The dry season had the highest LSB, NBA y NPW. First parity sows had higher LSB and NBA means than for second parity sows. Parity increase until parity 4 to decrease thereafter. LL had a quadratic effect on NPW and LWW. Repeatability estimates for LSB, NBA, and LWB were 0.12, 0.12 and 0.14, respectively. Conclusions. All traits studied were influenced by the environmental factors studied. Repeatabilities for LSB, NBA and LWB were low.

Litter size and piglet weight at birth and weaning are components of production that significantly influence the biological efficiency of sows and the profitability of farms. Hyperprolific modern sows have a high reproductive potential, which needs to be optimized according to the environmental and management conditions where they are employed. Important sources of variation in tropical regions are farm, farrowing year, farrowing season, and parity (1,2). In Mexico, there are few studies on the environmental factors affecting the size and litter weight at birth and weaning of sows in commercial pig farms under sub-humid tropical conditions (3-5). The identification of the factors affecting those components of productivity is necessary to adequate the operation, techniques and technologies of production systems. Furthermore, knowledge of the indicators is important to make better decisions, which means a better return on investment in swine production systems in tropical Mexico.

Besides foregoing, when the best sows are selected early in life, a greater gain in productivity is expected, because highly heritable traits retain that superiority over their productive lifetime. It is therefore important to measure the extent of which this is likely to happen, through the calculation of the repeatability of the trait of interest (6).

The aim of this study was to determine the effect of some environmental factors on litter traits at birth and weaning, and to estimate the repeatability of birth traits in four farms located in the sub-humid tropics of Mexico.

Study site. Data from the four typical commercial farms of the state of Yucatan, Mexico, were used to for this retrospective study. Yucatan is located between 19°30’ and 21°35’ north and 90°24’ west. The climate of the region is sub-humid tropical, with an average temperature of 26.6°C, an average rainfall of 1,100 mm, and a relative humidity of 78% (7).

Management in farms. Farms 1, 2 and 4 were full cycle farms with 3.900, 1.200 and 550 sows, respectively. Farm 3 was a two-site-type farm (breeding and production) with 320 sows. In all farms, breeding was carried out by artificial insemination; however if sows did get pregnant after three inseminations, natural mating with a boar was used. Estrus detection in sows was performed every day at 6:00 and 18:00 h using a boar, and inseminated two times (12-18 h), after estrus detection. Cross-fostering of piglets was carried out the first two days after birth in all farms. Sows were fed commercial diets according to their productive stage. Young sows (about 200 kg body weight) received 2.6 kg/day of feed with 3,000 kcal EM/kg, 16% crude protein and 0.8% lysine; whereas sows over 300 kg of body weight received 3.2 kg/day of feed. The four farms produced their own replacements and quarantine the replacement gilts before entering the breeding herd (approximately 24 weeks of age), and they were mated after 210 day of age. Gilt and sows were vaccinated against parvovirus, leptospirosis, swine erysipelas, mycoplasmosis, and pleuropneumonia diseases.

Animals. Data from 50.316 litters from 10.340 sows for total piglets born per litter (LSB), number of piglets born alive (NBA) and litter weight at birth (LWB), and 46.249 litters from 10.065 sows for number of piglets weaned (NPW) and litter weight at weaning (LWW) were used. Data were obtained from the computer recording system (PigCHAMP®) of the herds from 2007 to 2012. The main information used was farm name, sow identification, sow parity number, date of farrowing and weaning, litter size and weight at farrowing and weaning.

Data analysis. The statistical model used for LSB, NBA and LWB included the fixed effects of farm [1,2,3,4], farrowing year (2007,2008,..., 2012) farrowing season (dry, rainy and windy), parity number of the sow [1,2,3,4,5,6,7>8], significant simple interactions, and random effects of sow (0, σ2c) and the error NID (0,σ2e). The dry season covers the months from February to May, the rainy season from June to September and the windy season from October to January. Sows with 8 or more parities were grouped, because of small number of observations. NPW was analyzed using a model similar to that previously described, plus the linear effect of NBA and the linear and quadratic effects of lactation length (LL). The model for LWW was similar to NPW but including the linear effect of LWB instead of NBA. The statistical analyses were carried out using the MIXED procedure (8).

Repeatability estimates and standard errors were calculated only for LSB, NBA and LWB using both between and within sow components of variance produced by the MIXED procedure, according to the formula provided by Falconer and Mackay (6) and Becker (9). Repeatabilities for NPW and LWW were not calculated because of cross-foster of piglets practiced in the farms.

All the factors and interactions included in the models were significant (p<0.05) on the five response variables. The least squares means for the main factors are shown in table 1. 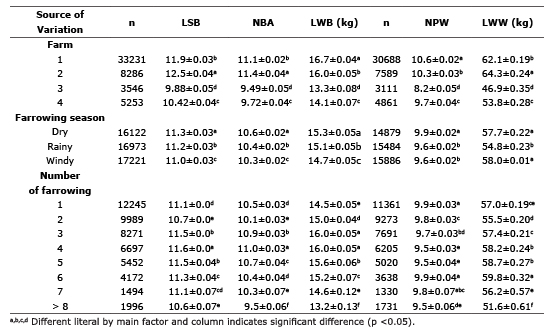 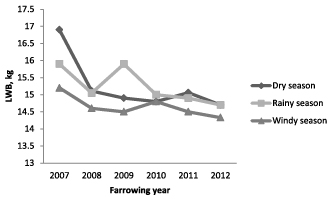 Figure 1. Year by season of farrowing interaction for litter weight at birth (LWB). 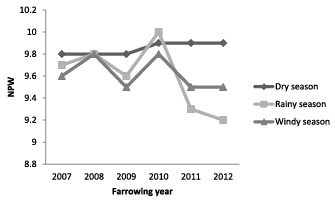 Figure 2. Year by season of farrowing interaction for number of piglets weaned (NPW). 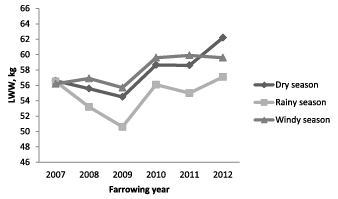 Figure 3. Year by season of farrowing interaction for litter weight at weaning (LWW).

Figure 4. Farm by season of farrowing interaction for litter weight at birth (LWB). 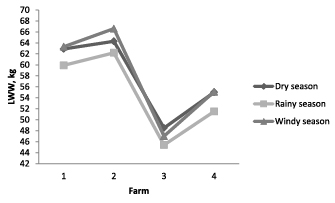 Figure 5. Farm by season of farrowing interaction for litter weight at weaning (LWW).

The overall means and standard deviations for LSB and NBA were lower than those reported by Abell et al (10) in USA (14.8 and 11.6 pigs, respectively). However, the means here found are higher than mean reported by Diaz et al (11) in Colombia, who obtained 10.8 pigs for NBA. The LWB mean was similar than the mean reported by Chansomboon (1) in Thailand with 16 kg, and higher than those reported by Fraga et al (12) in Brazil and Gourdine et al (13) in Guadeloupe with 15.0 kg and 14.0 kg, respectively. Schwarz et al (14) reported a lower NPW mean (8.4 pigs) in Polish Large White sows. Also, Chansomboon et al (1), Diaz et al (11) and Gomez-Medina et al (5) reported means of 8.57, 10 and 9.44 pigs, respectively. The LWW mean here found is lower than that reported by Gourdine et al (13); however it is similar to the 60.8 kg reported by Sai et al (15). The differences in mean values may be due to geographical location, management and application of differences technologies, and commercial breeds used, as well as population structure and the presence or not of diseases in farms.

The effect of farm on litter traits at birth and weaning has been reported by other authors (1,16,17). Farm differences primarily involves the skills and training of staff, housing systems, genetics of the reproductive herd, number of sows, average number of farrowing and implementation of reproductive and feeding techniques provided to the sow in the area of farrowing and lactation.

Effect of farrowing year has been reported for LSB and NBA (2,16,17). Causes of the differences between years studied in this work are difficult to explain but might be attributed to different management conditions, differences in climatic conditions or staff experience in sows management.

The interaction of year by season of farrowing was significant for LWB, NPW and LWW, similar to the results reported by other authors, under tropical conditions (1,18,19). The differences for LWB and NPW could be due to management and sanitary differences between seasons and years (Figure 1 and 2). Additionally, appropriate management practices can improve LWW, the trend of increasing LWW might be due to increasing feed intake. However, the rainy season showed lowest means of LWW in all years (Figure 3). The combination of high temperature and high humidity during the rainy season has been reported to be partly associated with reduced appetite (17). According to Chambonson et al (1) the interaction is the result of the combined effects of nutrition (nutritional content and composition of diets), climate (seasonal fluctuations in humidity and temperature), and management during the different years.

The effect of season or month on LSB and NBA in tropical regions has been reported by other authors (2,5,16,17,18). Suriyasomboon et al (17) and Tummaruk et al (2) indicate that in the tropics regions the effect of season is due to the high environmental temperature, high humidity, and to a lesser extent to changes in the photoperiod. Negative effect of high ambient temperature affects reproductive traits of sows, either by acting directly on ovarian function or to the hypothalamic-pituitary-ovarian axis level (17). Also, in tropical areas such as Thailand and Brazil, Suriyasomboon et al (20,21) and Freneau et al (22) indicate that the high temperatures have a significant negative effect on ejaculate volume, total sperm counts and the morphology of the spermatozoa of the boars.

Table 1 shows a decrease in LSB and NBA from first to second parity, a phenomenon known as the syndrome of the second litter, which has been reported by other authors (23,24). Hoving et al (24) and Schenkel et al (25) indicate that the reduction in litter size after the first farrowing is probably due to a lower rate of ovulation and to an increase in embryo mortality because gilts are more susceptible to lose weight during lactation and have not finished their corporal development yet. First farrowing females with larger NBA may have not enough feed intake during lactation to fulfill their nutritional requirements, so that embryonic survival (and subsequent litter size) in these females is reduced.

The effect of parity number on LSB and NBA has been reported by other authors (2,16,17,26). Also, the effect of parity number on LWB, NPW and LWW has been reported by Tantasuparuk et al (18) and Chansomboon et al (1). The usual increase in litter size up to parity 4 is probably due to the increase in ovulation rate, uterine capacity and age of the sow (27).

In conclusion, under the conditions of this study, all the environmental factors studied were important sources of variation for all litter traits at birth and weaning. Therefore all of them should be considered in production programs to improve management strategies and herd feeding in order to reduce the effect of both season farrowing and number parity to improve farm’s productivity and profitability. Repeatability estimates were low but within the values reported in the literature.

2. Tummaruk P, Tantasuparuk M, techakumphu M, Kunavongkrit A. Seasonal influences on the litter size at birth of pigs are more pronounced in the gilt than sow litters. J Agri Sci 2010; 148:421–432.

17. Suriyasomboon A, Lundeheim N, Kunavongkrit A, Einarsson S. Effect of temperature and humidity on reproductive performance of crossbred sows in Thailand. Theriogenology 2006; 65:606–628.