Curve control, development and phenotypic bad formations in poodle the city of Medellin

Objective. Quantifying phenotypic malformations and make a curve control and development of the breed Poodle puppies in the city of Medellin. Materials and methods. We analyzed 60 individuals, 30 females and 30 males were measured and weighed from 2 to 12 months of age with these data, build a table and a control growth curve and after about 12 months of age there were the Phenotypic malformations, which are considered by the American Kennel Club (AKC) and Cynological International (FCI). Results. Of the specimens analyzed, 10% had bone spurs, cryptorchidism 20%, 5% had polidoncia a year old, with teeth retained teeth more often. Conclusions. In an effort to find examples of smaller faults have been committed at the time of mating, resulting in increased phenotypic malformations found in the study, this work also provide veterinarians, another tool for assessing pediatric puppies Poodle race in the city of Medellin.

All live beings fulfill a series of stages such as to be born, to grow, to reproduce and to die; growth and development are fundamental stages that form some characteristics that helps to move on to other stages (1,2).

In human medicine, the terms growth and development are an interdisciplinary area that involves all activities for a child to have a physical and intellectual development similar in comparison with their peers. This is accomplished with the implementation of measurement tables and growth curves (1).

In veterinary medicine, this subject is not widely studied. Some growth tables exist for bovine, equine and canine animal breeding to ensure a good phenotypic and production development (3,4).

The guidelines given by these associations are directed to the conservation of some standards for some dog breeds, whether these are for exhibition or companion dogs (6,7).

These associations consider several factors such as weight, size, coat color and body characteristics to form a standard for each breed. They also dictate failures or penalties that a particular specimen deserves (6,8).

In the city of Medellin, one of the most popular canine breeds is the poodle. Because of this and because of the breeder’s eagerness to achieve a small size specimen (the so called tea cup), a degeneration of the characteristics of this breed has occurred.

With the problem in mind and because of the lack of tools to adequately measure the development of the puppies from this breed, a work was conducted in which 60 poodle puppies were subjected to analysis of different variables such as weight, size, coat color and they were compared to the international standard; also, a table and growth and development control cure was developed in order to assess the progress of these puppies. This analysis could be another tool for analysis by small animal clinics for a better pediatric assessment of this specimen.

Study location. The data used was obtained from the Genetic Veterinary Center in the city of Medellin (Colombia).

Selection of specimens. The only factor that was considered to select the specimens was that these were sons of phenotypically recognized poodle dogs or that they would come from a kennel.

Type of study. A descriptive study was conducted in which 60 puppies of the poodle breed (30 male and 30 female) from 2 to 12 months old were monitored. 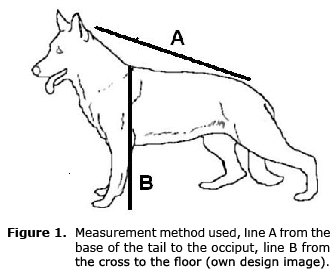 Statistical analysis. The data is described with a percentile for phenotypical malformations and the average; percentiles 25, 50 and 75 of weight and size to build the curves and the body condition was measured in a scale of 1 to 5 (9); Excel Microsoft Office® 2007 was used to determine the previous values.

With respect to the color of the coat it was found that 43 specimen were white, which is equivalent to 71.6% of the total; 6 were black (10%) and 11 (18.5%) were of another color, among which are grays, apricot and a combination of colors.

With respect to other findings, it was found that 6 specimens that correspond to 10% presented bone spurs; 6 male, which correspond to 20%, had cryptorchidism; 3 individuals, which correspond to 5%, presented polydontia at age one, being the tusk of the retained tooth the most frequent; 1 female (1.6%) presented lower prognathism by age one; also, by age one, it was observed that only 3 females, equivalent to 10%, had been sterilized and no male had been sterilized; lastly, 3 specimens equivalent to 3.3%, had not been subjected to caudectomy because their owners consider this practice to be aberrant.

With the sizes and weights recollected, the following tables were elaborated for male and for female, which have the 25, 50 and 75 percentiles; also, with these values, a growth curve was build for each gender (Tables 1, 2 and Figures 2-5). 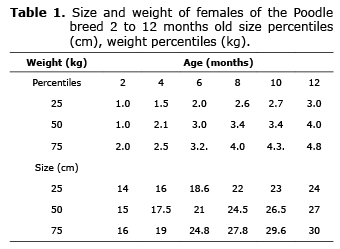 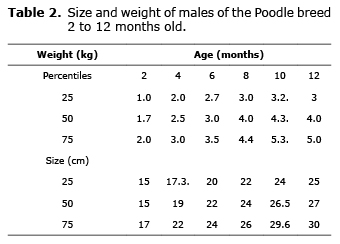 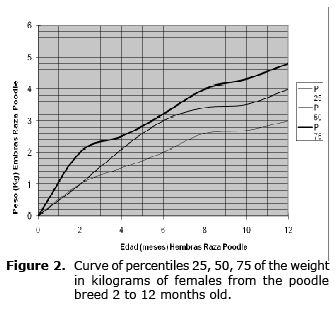 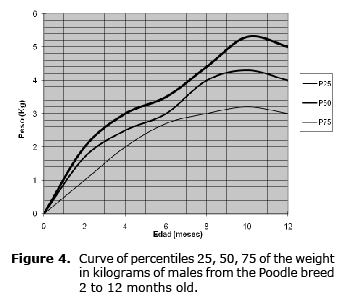 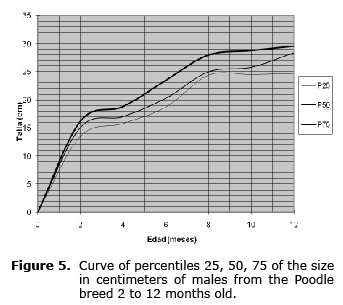 From the moment of conception, all live beings acquire a genetic determination that will have an impact during their entire life, but that immediately starts to become influenced by the environment in its growth and development process (1, 10).

Nutrition must also be added to this; all dog breeds have nutritional requirements that will depend on the size of the specimen, the sex and the activity (11). When observing the results obtained in this study, we found that the white coat color prevails over the other colors. Among the owners of poodle dogs in our environment, there is a belief that white color specimens are more pure than other color specimens. This is due to lack of information on breed standards (6, 7)

In the study, phenotypical malformations were found, some of them penalized by different associations and canine clubs. One of these problems, cryptorchidism, has a hereditary genetic component (4,10); as a preventive rule, these specimens should be sterilized or should not be able to reproduce.

Polydontia was also observed in some specimen. It is worth noting that this problem will cause adult animals to present bad formation of the oral cavity due to the overcrowding of teeth and the wrong location of some of the teeth that can cause bruising and pain when chewing (3, 12). All of this will result in halitosis, a periodontal disease, and the surgical corrections that should be performed to remove the supernumerary teeth (12, 13).

It is the duty of the veterinary to recommend early sterilization of females and males, because, as it was observed in the study, this practice is not widely used; emphasis should be made in all the benefits that are obtained when performing the procedure at an early age, such as the appearance of reproductive pathologies, unwanted pregnancy, suppression of the estrous cycle and low probability of appearance of breast tumors (3,4).

Another significant finding of the study is with respect to the body condition reached at age one. Although a large percentage of these individuals reached adulthood with an ideal body condition of 3, these are not even 50% of the study’s total. Therefore, it can be seen that there are serious problems in the nutrition of the puppies from this breed; since there is a high percentage of individuals that reached a body condition of less than 3 (low weight). This was observed primarily in females; however, there is a higher percentage of males that reached the body condition with over weight; it has been found that a puppy that arrives with a poor body condition score (less than 3) at the end of their growth cycle, it will result in an adult dog that will not perform well, will be susceptible to bacteria infection and parasites (9,14).

Regarding weight, it was observed that the individuals reached an average weight between 3 and 5 kg at 12 months, something similar to Posada et al (2014) findings, although for them, it was the average size of smaller breeds (15).

When asking the owners about the nutrition of these animals, most responded that the nutrition was voluntary; owners do not know or do not use the food quantity tables from the labels found on animal food products. Some also responded that they gave pieces of their own food as treats for their dogs, because they believe that their dogs get tired of eating always the same thing.

It was also found that procedures such as caudectomy, have slowly stopped being performed; in many canine events and exhibitions, specimen with tail are no longer penalized; previously it was mandatory to amputate the tail so that the specimen would not be disqualified from the competitions (6,7).

With respect to the elaboration of the growth curves, one must keep in mind that all growth curves or monitoring of weight have three parts; the first is an accelerated growth phase; the second is a slow growth stage and the third is the stabilization part (1).

The use of several percentiles to form the curves instead of only using one percentile has the purpose of monitoring in more detail each individual and it helps us locate and compare their growth or their weight with respect to the rest of the population in a given moment (1).

In conclusion, the veterinary must emphasize the recommendations for the puppies’ nutrition during all phases of development (9, 15) and constantly monitor their fulfillment in order to perform the necessary corrections at a given moment, and must also discourage the reproductive practices that could cause phenotypical malformations in a specific breed.

The importance of having growth tables and curves like the ones obtained in this work is so they can be used as main tools for the evaluation and monitoring of the correct growth and development of puppies, as well as a point of reference to make the timely necessary nutritional corrections as in human medicine.