Productivity and Composition of Fatty Acids in Chicks fed with Azadirachta indica A. Juss

Objective. Evaluate the productivity and composition of fatty acids in chicks fed diets enriched with neem Azadirachta indica A. Juss seed flour. Materials and methods. 80 mixed broiler chicks of Arbor Acres stock and levels 0, 1, 3 and 5% neem seed flour added to a commercial diet were evaluated. 20 experimental units were included in each treatment for five weeks. The consumption and weight gain were recorded, as well as the composition of fatty acids in the fat by means of alkaline transesterification. Data was statistically analyzed by a completely random procedure and the measurements were compared with the Tukey test(p≤0.05). Results. The greatest weight gain, consumption and best feed conversion were found in the treatment that contains 1% neem seed flour. It also produced the increase in the proportion of polyunsaturated fatty acids, especially linoleic acid (C18:2 Omega-6) and eicosapentaenoic acid (C20:5 omega-3), and the proportion of palmitic acid (C16:0). The consumption of feed diminished when 5% of neem flour was added. Conclusions. It was demonstrated that incorporating 1% neem seed flour in the diet of broiler chicks modifies the consumption of fatty acids without harming its productive behavior.

Poultry farming produces protein at a lower cost in comparison with products of a similar origin. The demand for quality protein for the population has driven the study and exploitation of different plant species that could favor an increase in poultry breeding (1) with additional benefits for the consumer, such as a greater proportion of unsaturated or polyunsaturated acids, and higher quality protein in chicken meat (2). Some of these characteristics have been developed by feeding poultry with vegetable products, such as seeds and fruits, which contain unsaturated fatty acids (3). Consequently, the production and commercializing of poultry meat with a lesser proportion of fats and saturated fatty acids, as well as increasing the omega-3 polyunsaturated acids, is highly desirable as a nutritional element to prevent cardiovascular diseases or inflammatory pathologies (4-6). In this sense, neem Azadirachta indica A. Juss has been considered, a species that belongs to the Meliaceae family and that is highly adaptable in tropical and subtropical regions (7), as a potential for poultry feed, by considering that the seeds contain considerable amounts of unsaturated and polyunsaturated fatty acids and proteins. However, neem seeds also contain high amounts of raw fiber as well as some triterpenoid compounds that could seriously limit its consumption (8). Due to the above, the general objective was to evaluate the productivity and composition of fatty acids in the fat of chickens fed different compositions of neem Azadirachta indica A. Juss seed flour.

Study site and stages. This study was developed in two stages; one in the field for the weight, consumption and feed conversion variables (FC) of the birds, and the other in the laboratory to determine in each treatment the profile of fatty acids in the chickens fed. The first stage was done in the poultry module of the Faculty of Agricultural Sciences (FCA) Campus IV, of the Universidad Autónoma de Chiapas, municipality of Huehuetán, Chiapas, Mexico, located at parallel 14°59’50” N and meridian 92°24’0” west of Greenwich. The region’s climate is subhumid tropical with summer rains (Am). The second stage was carried out in the research laboratory of the Center of BioSciences of the Universidad Autónoma de Chiapas, city of Tapachula de Córdova y Ordoñez, Chiapas, located at 14°53’36.31” N and 92°16’22.83” W and 147 meters above sea level.

Birds and diet preparation. 80 commercial chicks of the Arbor stock, one day old, were randomly distributed in four groups of 20 chicks and each group was placed in a 6 m2 space. Neem seeds were obtained from trees that were 20 years old that had grown in the FCA. The fruit was collected in autumn and were deposited in water for 24 h. After this time, the mesocarp was manually removed to separate the seed, which was washed and sun-dried for a week, and was later put in a forced air oven (Sheldon, VWR 1390FM, USA) at 70°C for 24 h to reduce the humidity to 12%. The dried seeds were ground and sifted to obtain flour with particle sizes between 1 and 2 mm, and it was incorporated and mixed manually in the commercial diets each week, according to the corresponding percentage of the treatment (Table 1). 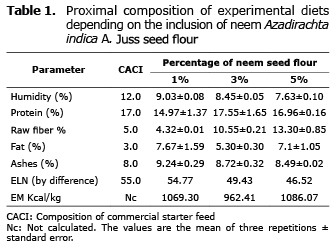 Treatments and feeding. The treatments were: 1) control that consumed only commercial feed (CF), 2) CF plus1% neem seed flour (NSF), 3) CF plus 3% NSF and 4) CF plus 5% with NSF. A completely ramdomized design was used with four repetitions, and each repetition integrated 20 chicks in each treatment.

Productive parameters. The weekly body weight of each bird was recorded weekly, and the daily consumption of feed and CF was calculated by the amount of feed rejected by the group.

Composition of fatty acids. Fat was obtained by means of the Soxhlet method (9), and the fatty acid methyl ester (FAMEs) were obtained by means of alkaline transesterification (10). The procedure was started by depositing in a vial (washed with hexane and dried for 2 h at 300°C) 2ml of hexane and 40 mg of abdominal fat at 40°C for 1 min, and after this time, 100 µl of sodium methoxide were added (prepared with NaOH 2M in absolute methane), was shaken vigorously for 2 min, was heated for 5 min (40°C) and was centrifuged at 5000 rpm for 10 min. The supernatant containing the FAMEs was used to determine the composition of fatty acids by gas chromatography mass spectrometry (Thermo Scientific Focus GC chromatograph and Thermo Scientific DSQ II spectrometer of mass).

1 µl of the FAMEs was injected in a column of intermediate polarity with the following temperature program: 100°C, heated 25°C min-1 to 200°C, 2.5°C min-1 to 230°C for 1 min, and 10°C min-1 to 250°C. The chromatograph was operated with helium gas, creating a pressure of 3.5 psi. The injector was programmed in Split 60:1 mode at a temperature of 280°C. The spectrometer of masses was operated with ionization voltage of 70 eV, and interface temperature of 280°C in Scan and mass range from 50 a 500 m z-1. The compounds of each sample were identified by comparison with it mass spectrum with the compounds of the library of the National institute of Standards and Technology (NIST). The sum of all the proportions of fatty acids was considered 100% of the fat and the proportion of each fatty acid was reported as a relative percentage. Four repetitions of each treatment were analyzed.

Statistical analysis. Data were statistically analyzed by means of the SAS program version 8.2, and the comparisons between treatment means by Tukey (p≤ 0.05)(11).

Productive parameters. Greater weight at sacrificing was seen in chicks that consumed the diet with the least percentage of NSF (1%) and the constant treatment (p≤0.05). The lowest body weight was observed in the chicks that consumed 5% of NSF (Table 2). The increase in the percentage of NSF in the diet induced a lower body weight in the birds. When 5% NSF was added to commercial feed, the final weight of the birds was 10.2% less in comparison with birds fed with 1% neem seed and 5.9% less weight in comparison with chicks fed with only commercial feed. 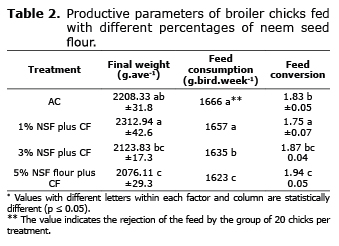 In the case of CF the tendencies of inclusion of the different percentages of NSF in the commercial diet was contrary to the consumption; that is, the lower percentage (1% of NSF) presented the lesser CF and this value increased as the NSF percentage increased. 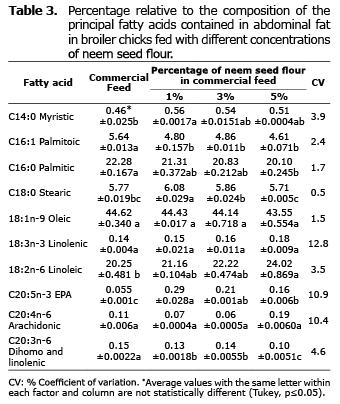 The saturated fatty acids in the C16:0 series, of which palmitoleic and palmitic acid presented the largest proportion in a control group, that is, in the birds fed only with commercial feed, in comparison with the treatments that included some percentage of NSF in the diet. The results were statistically different (p≤0.05). Stearic acid was increased with the 1% NSF in the diet and was statistically different from the other treatments (p≤0.05). Oleic acid presented similar percentages among the treatments and without statistical differences (p≥0.05) between them. The concentrations of polyunsaturated linoleic acids were increased as the percentages of NSF were increased in the diet. Linoleic acid, with a diet of 1%, increased 4.4%, 9.7% with 3% and 18.6% with the 5% dose in relation to the birds that consumed only commercial feed and were statistically different (p≤0.05). The differences found in linolenic acid by adding 1, 3 and 5% de NSF to the commercial diet were 7.1, 14.2 and 28.5% in relation to the commercial diet and without differences (p≥0.05) between the treatments. Instead of eicosapentaenoic acid was found in greater proportion with the lesser quantity of NSF added to the commercial diet. This represents the greater increase between the fatty acids evaluated. The arachidonic acid did not show an increasing tendency with the NSF levels in the diet, only with a greater percentage, the increase of it was the highest, but without significant differences between them.

The final weight of the birds fed with NSF was different in the percentages added to the commercial diet. Adding 1% NSF increased the final weight of the chicks. The differences in weight of the birds, with their different percentages of NSF, can be influenced by the decrease in the consumption, caused by the increase of the raw fiber content with the addition of the percentages 3 and 5% of flour, at the same time that the greater percentage of NSF restricted consumption and consequently the final weight decreased. The decrease in consumption of the feed with high fiber content for the birds has been consigned (12, 13). Additionally, the fiber content, another factor that could have restricted the consumption in the different diets is the presence of polyfenols, triglycerides and some triterpenoid compounds in the neem, which determine the bitter taste that interferes in the sensorial perception of the birds (14). By increasing the percentages of fiber in the flour, the ingestion of feed diminishes (12), and therefore, lesser body weight is seen (12, 13) due to a reduction in the metabolizing the nutrients (12).

The lowest percentage of NSF in the conventional diet induced greater CA, as well as consumption and weight gain. The final weight of the birds fed with NSF is greater in comparison with providing other components in the birds’ diet (15,16). The decreased concentration of saturated fatty acids in the fat of birds fed with NSF suggests benefits to the health of consumers (17).

Other authors (18) fed chicks with 10% pumpkin seed (Cucurbita moschata) and found that it diminished the abdomen and thigh fat in birds (19), added 33 and 66g of pumpkin flour per kg of feed and they did not find significant differences in the variables of weight and feed conversion, but yes in the diminished abdominal fat in the birds. Broiler chicks with 5 and 10% chia flour (Salvia hispanica L.) found a greater content of linolenic acid and a reduction in the content of palmitic acid in the tissue analyzed as the percentage of chia increased (20). Similarly, by adding 1% NSF produced an increase both in the proportion of linolenic acid (18:2 omega-6) and eicosapentaenoic (EPA: C20:5 n-3). These results are greater when compared with the constant (without adding NSF).

In conclusion, the NSF of Azadirachta indica A. Juss., is a feed alternative for chicks and the greater weight and CA recorded when they consumed a diet that includes 1% NSF.

The authors would like to express their appreciation to the Center for Biosciences of the Universidad Autónoma de Chiapas and the National Council on Science and Technology (CONACYT) for their economic support to continue this investigation.