Objective. Determine the profile of the canine patient with esophageal foreign bodies to identify risk factors associated with the foreign bodies. Materials and Methods. This is a retrospective study made by the Veterinary Hospital Clinic of the Universidad de Extremadura (VHC). Different factors were analyzed in dogs with an endoscopic diagnosis of esophageal foreign bodies. Results. This pathology was more commonly found in young adult dogs and in small breeds. This pathology was present for the first time in the Portuguese Warren Hound, which was also the breed with the highest risk. Conclusions. The results obtained in this investigation are in agreement with the previous description of a patient that presents esophageal foreign bodies. Also, the Portuguese Warren Hound was found to be predisposed to this problem, with a higher risk factor than other breeds previously mentioned in the literature. To prevent esophageal foreign bodies, dogs should be fed raw meat and bones, especially small breeds. This pathology should always be kept in mind in dogs with esophagitis symptomology regardless of age, although it is most common in young adult dogs.

Esophageal foreign bodies are relatively common in the treatment of small animals, most frequently in dogs. They cause symptoms characteristic of esophagitis like dysphagia, ptyalism and regurgitation (1). Moreover, they can cause severe damage to the esophagus, producing severe esophagitis and cicatricle stenosis as sequela. For these reasons, immediate diagnosis of this pathology is important (2).

Esophageal foreign bodies are more common in dogs than in cats due to their eating habits and way of playing. Among dogs, it is most frequently seen in small breeds, thus research exists where dogs less than 10 kg are observed to be more greatly affected by esophageal foreign bodies. However, the weight range in some studies varies between 1.8 and 56.0 kg (3).

The risk factor is defined as the characteristic or factor that is observed to be associated with an increase in probability that the sickness should occur. The term of risk implies that the presence of a factor increases the probability of adverse consequences (4). Among these factors is the breed of dog (5). The factor of relative risk or hazard ratio (HR) is interpreted in the following way: the sickness is HR times more probable to occur in animals exposed to the risk factor than those who have not been exposed (5).

The objective of the present work was to determine characteristics of patients with esophageal foreign bodies to identify the risk factors of this condition.

Study Site. The present study was done at the Veterinary Hospital Clinic (VHC) of the University of Extremadura, Cáceres, Spain.

Animals. The work was carried out with dogs with endoscopic diagnosis of an esophageal foreign body. The evaluation parameters were: origin of the patient (referred or internal), sex, age of the patient; dividing this segment in 5 groups: a) less than a year old, b) patients from 1 to 4 years old, c) from 5 to 7 years old, d) from 8 to 10 years old and d) older than 11. Also, the breed and weight of the patient were taken into account; with this criteria, groups were formed according to size of the breed according to the Federation Cynologique Internationale (FCI): a) miniature breeds or less than 6 kg, b) small breeds or from 6 to 11.9 kg, c) medium breeds or from 12 to 32.9 kg, d) large breeds or from 33 to 49.9 kg and d) giant breeds or more than 50kg.

Experimental Design and Analysis of Statistics. This is a retrospective study carried out over the course of 10 years. With the results that were obtained, a data base was produced with the SPSS program, through which an analysis was made of the frequency of the different parameters and of contingency tables.

Also, the risk factor was calculated for breeds of dogs that most frequently presented an esophageal foreign body through endoscopic diagnosis. In addition, the risk factor was calculated for the Spanish Greyhound and the Spanish Mastiff who were fed food scraps and bones. The total number of dogs, attended and sick, and the formula used can be seen in table 1. The dog breeds to be evaluated were considered as exposed, and every other breed as not exposed, while dogs with an esophageal foreign body were considered sick animals. 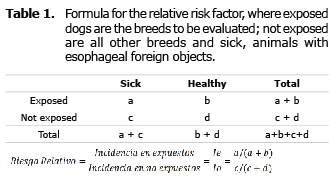 During 10 years of study, a total of 6,770 dogs were treated by surgery. Through endoscopic diagnosis, thirty of those were found to have an esophageal foreign body, representing 0.44% of the treated patients.

Esophageal foreign bodies represented 24.06% of digestive tract endoscopies and also represented 50% of diagnoses through esophagoscopy. Additionally, 57.69% of foreign bodies found through an endoscopy were esophageal, 36.58%were found in the stomach and only 5.76% in the duodenum. 67.85% of patients that had an esophagoscopy because of a foreign object were referred. 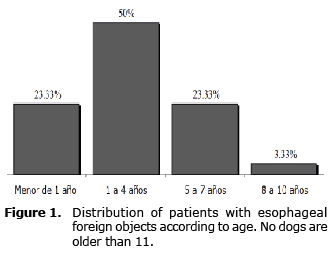 The size of the patient influenced the frequency of appearance of esophageal foreign objects. The study found that almost half of the animals (48.28%) were less than 6 kg (Figure 2). The size of the patient was a parameter linked to its breed, which is why its influence was also analyzed noticing that 90% of esophagoscopies done because of foreign objects were on purebred dogs, while only 10% were done on mix breed dogs. This percentage is low if we take into account that 27.65% of all patients brought to the VHC were mix breed dogs. Among the purebreds the Portuguese Warren Hound (8 to 20 kg.) was the one that presented the most esophageal foreign objects (20%), followed by the Yorkshire Terrier (16.16%), Miniature Poodle (13.33%), West Highland White Terrier (10%) and others (Figure 3). 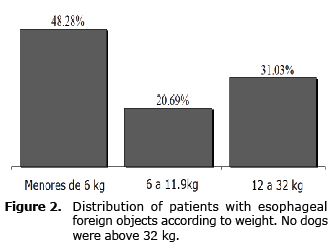 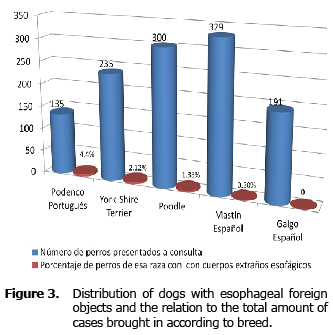 The percentage of animals referred to the VHC for diagnoses and treatment of esophageal foreign objects is greater than the average of esophagoscopy requests in general. External veterinarians refer and request esophagoscopies to a greater number of patients when the pathology is a foreign object, proving that they recognize the usefulness of this technique in the treatment of this pathology.

In this study, the percentage of dogs endoscopically diagnosed with esophageal foreign objects in relation to the total of dogs attended in the surgery section of the VHC is similar to the one recently shown in another research (6) that mentions that esophageal foreign objects represent 0.32% of hospital visits. Similarly, the number of patients that visited this institution during the time period is similar to the one described by other researchers (2,3).

The data obtained in this research on the canine species as the only one that had esophageal foreign object endoscopy is similar to the bibliography. There it mentions that foreign objects are more common in dogs due to the habit of eating without chewing and their playfulness. Additionally, another retrospective study of gastrointestinal foreign objects, mentions that of 17 pets affected, just one was a cat (9).

With regards to the sex of the animals in this study, despite having a slight majority of females, which has already been described by other authors (9, 10) this does not represent a meaningful difference.

The age group with most patients was from 1 to 4 years old. This number coincides with a previous study where the average age of dogs with esophagitis by foreign objects was 4 years (10). In human medicine, esophageal foreign objects are most common in children between 1 and 3 years old because of their restlessness and their tendency to put things in their mouth while crying, running or playing (11). One could assume that puppies have a higher tendency to suffer from this pathology due to their inexperience and playing habits, and the extrapolation of the findings in human medicine. Data from this study shows that there is no evidence to support that assumption, because dogs under 1 year of age only represented 23.33% of patients with esophageal foreign objects.

This research confirms that small size dogs are more affected by this pathology, showing that almost half the animals in the study (48.28%) were less than 6 kg (Figure 2). As a matter of fact, the percentage of patients is very high if we take into account that the affected breeds visit the VHC’s surgery service in a low proportion; the Yorkshire terrier representing only the 3.39%, and the West highland terrier and the Warren Hound representing only 2% of the total. The results coincide with those of other authors. There is a retrospective study conducted in 19 veterinary hospitals in the United States in a period of 6 years where the esophageal obstruction caused by dental hygiene treats is described. Of all dogs with this problem the majority were small breeds, representing an 83.9% (12). At The same time, other studies mention several small breeds with a tendency to have this problem, among them are Poodle (9), Yorkshire terriers (10, 13) and West Highland white terrier (13, 14).

It is confirmed in the literature that along with the tendency of the West Highland White Terrier, there is an increase in the number of cases because of the new practice of feeding dogs with raw food and bones (7, 15). It is evident that these small breeds have a tendency to have esophageal foreign objects, but other small breeds with similar habits like the Chihuahua, the miniature Pinscher and Pomeranian do not present this phenomena at the same rate. For this reason, it is necessary to investigate why certain small breeds have a higher tendency, in order to establish if the Miniature Poodle, the West Highland White Terrier and the Yorkshire Terriers have a relatively narrower esophagus or thorax, or a difference in the size of their abdominal esophagus; this supports the importance of the abdominal esophagus, that according to the La Place law, the greater the size the greater the intra-abdominal pressure producing higher resistance (16). Additionally, a study showed that the portion of the abdominal esophagus has different sizes according to the breed, even reaching the thorax (17).

Along with this research a report has been published mentioning that the Portuguese Warren Hound is the breed with more diagnoses of esophageal foreign objects (17). It is easy to think that this breed is the most affected because of how common it is in the Peninsula and the tendency to feed hunting dogs with bones and scraps in Extremadura, Spain. However, other breeds fed with bones commonly brought into the VHC like the Spanish Mastiff, had a very low risk factor and the Spanish Greyhound did not present esophageal foreign objects (Table 2). 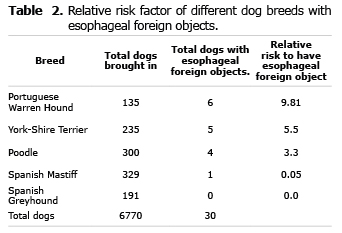 The risk factor is a characteristic or factor associated to the increase in the probability of developing a sickness (4,5). The breed can, therefore, be considered a risk factor (5). Based on this data one concludes that there is a tendency of the Portuguese Warren Hound to have esophageal foreign objects. This breed’s relative risk factor is 9.81, the highest of the study, even higher than the breeds traditionally considered of high risk like the Yorkshire Terrier and the Poodle.

A limiting factor of this study is the number of patients brought in with esophageal foreign objects; nevertheless, there are other publications with a similar number of patients (2, 3, 6). It is important to take into account that to calculate the relative risk prevalence rate, the population is all the patients that visited a veterinary school clinic or a reference clinic (18) as in the case of the VHC of the Universidad de Extremadura.

In conclusion the results of this research coincide with what has been previously described in terms of characteristics of the patient with esophageal foreign objects. It is also reported that the Portuguese Warren Hound has a predisposition to suffer this ailment, with a higher risk factor than other breeds in Spain. This pathology always needs to be taken into account with dogs with esophageal sickness symptomatology regardless of its age, because it is more common in young adult dogs. Finally, to prevent esophageal foreign objects, dogs, especially small breeds, should not be fed raw meat and bones.