Objective. The objective of the current study was to compare two methods to estimate daily milk production in crossbred hair ewes. Materials and methods. Eight multiparous, crossbred (Pelibuey x Katahdin) lactating hair ewes were used in a completely randomized design with repeated measurements, for 56 days. Ewes were fed ad libitum with a diet based on concentrate. Milk production was estimated twice a week for each ewe by both methods, suckled-hand (SH) and weigh-suckle-weigh (WSW) method. Results. Milk production (p>0.05) means were 1031.9±95.6 and 1119.0±95.6 g/day/ewe for SH and WSW method, respectively. Conclusions. No significant differences (p>0.05) were found between methods for milk yield.

Daily milk intake is the most important factor in determining lamb growth rate; therefore survival and potential growth of lambs depend on lactation of the dam. Due to the influence of milk yield on weaning weight and to the large variation in milking ability among the genotypes available in tropical areas, the estimation of milk production by lactating ewes contributes with useful information for the implementation of management strategies for ewes and their lambs. Direct measurement of milk production in non-dairy tropical sheep is difficult. For these reasons direct (e.g. hand or mechanic milking) and indirect (e.g. weigh-suckle-weigh method, udder dimensions) methods are commonly used to estimate milk production, however, these methods have demonstrated inaccurate results (1,2).

One of the most cited methods for measuring milk production is the weigh-suckle-weigh (WSW) method (3,4). Some authors describe that use of the WSW method can generate underestimation of milk production at the beginning of lactation (1,5), mainly in ewes with single lambing. For this reason, other authors modified the WSW method (6), by adding a hand milking after second weighing of the lamb, in an attempt to obtain a valid estimation of milk production. The evaluation or comparison of methods to estimate milk yield in non-dairy tropical sheep has been little documented; however some authors reported milk production of 1029 g/day in Pelibuey ewes at the first 20 days post-lambing by WSW method (7). The objective of the current study was to compare two methods to estimate daily milk production in crossbred hair ewes.

Study site. The study was conducted at the Faculty of Veterinary Medicine and Animal Science, Autonomous University of Yucatan (20°58’N and 89°37’O) Yucatan, Mexico. The climatic conditions in the study area correspond to the AW0 classification, characterized as warm and subhumid with a single rainy season between May and October, annual rainfall from 800 to 1000 mm, annual temperature from 26 to 28°C and relative humidity between 65-85% (8).

Animals and experimental design. In this trial eight multiparous hair ewes (Pelibuey x Katahdin) with single lamb (five females and three males) and average body weight (BW) of 42.93±9.93 kg were used in a completely randomized design with repeated measurements. Animals were individually housed (2.5x2.0 m) with their lambs in pens equipped with feed and water containers. The experimental period was the first 56 days of lactation, considering the first seven days as an adaptation period. Ewes were fed ad libitum with a diet based on concentrate, 10.25% crude protein (CP) and 12.32 MJ/kg dry matter (DM) of metabolizable energy (ME), balanced according to NRC (9) requirements. Pens and feed containers were arranged so that the lambs have no access to the dam’s feed. Ewes were dewormed after lambing by an intramuscularly application of Levamisole (Aranda Laboratories, Queretaro, Qro., Mexico).

Milk production was estimated twice a week for each ewe by both methods, suckled-hand (SH) method (6) and weigh-suckle-weigh (WSW) method (10), from the second to the eighth week of lactation.

Milk estimation through SH method. Once a week, lambs were separated from their dams for 12 h beginning at 20:00 h. The day after lambs were weighed with a digital weighing scale (5 g/kg of precision) at 8:00 h and at that moment they were allowed to suckle the ewe for 10 minutes, then lambs were weighed again immediately to estimate the amount of milk suckled. Additionally, after suckling, the ewes were hand milked soon after to get the milk left in their udders and this quantity of milk was recorded. In order to obtain the residual milk in dams an intramuscular injection of three IU of synthetic oxytocin (Aranda Laboratories, Queretaro, Qro., Mexico) was used. During the separation period lambs were located in pens allowing sight and smell contact with their dams and avoiding suckling. After milk measurement lambs were kept with their dams the rest of the day. Daily milk production was calculated by summing up the milk suckled by lambs (difference between lamb’s weights) and milk obtained by hand milking. Then, the result of this calculation was multiplying by two, with the aim to extrapolate the estimation of the milk production in 24 h period.

Milk estimation through WSW method. Once a week, lambs were separated at 3:00 a.m. from their dams for three hours and after that, they were allowed to suckle for 10 minutes. Then, lambs were separated again from the ewes for three hours. During the separation time lambs were located in pens allowing sight and smell contact with their dams and avoiding suckling. After this second separation period (9:00 h), lambs were weighed and then they were allowed to suckle the ewe for 10 minutes, after that they immediately were weighed again. The difference between pre and post-suckling weights was defined as milk consumption and consequently milk production. This recording was made over the 12 h period (6:00, 9:00, 12:00, 15:00 and 18:00 h). Then, the daily milk production was calculated by summing up the estimations recorded and multiplying the result by two.

Ethics aspects. The present trial was approved by the Bioethic Committee at the Faculty of Veterinary Medicine and Animal Science of the Autonomous University of Yucatan. 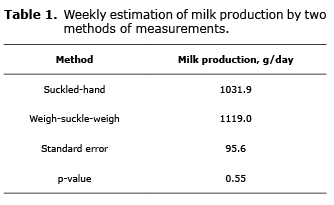 Milk production between weeks (Figure 1) was different (p≤0.05). At the seventh post-lambing week there was significant difference (p≤0.05) in the estimation of milk production (1043 and 1497 g/day for SH and WSW, respectively) according to the method used. 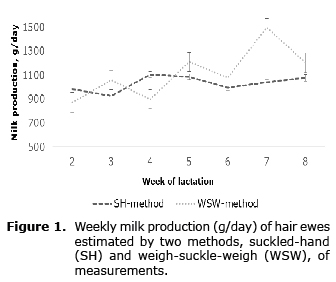 The orthogonal regression (Table 2), shows no significant difference (p>0.05) between methods in the estimation of milk production coefficient. The confidence intervals (95%) for the intercept (a) and the slope (b), included 0 (p>0.05) and 1 (p≤0.001), respectively. Moreover, the error-variance ratio (SH/WSW) between methods around 1 suggests equality in the estimation by both methods.

The estimation of milk production by the methods used in this study was similar to the results reported in Pelibuey (1029 g/day) and Karadi ewes (1223 g/day) by different authors (6,7) and higher than the results described (603-750 g/day) in West African ewes (4,13).

The maximum milk production for the SH method in the fourth post-lambing week is in agreement with other studies (6,14) where the production peak were reached between the third and fifth week of lactation. In the normal curve of lactation, close to the third week, a peak of lactation is expected (6). Furthermore, some authors have reported that milk production on non-dairy sheep maintains a maximum level during the first four or five weeks of lactation (2).

On the contrary, the peak of milk production with the WSW method disagrees with the literature as it reaches the maximum level lately; at seventh week normally milk production decreases (15). It could be partially related to the fact that methods used to measure milk production have the potential to interfere with the natural behaviour of the dam and her young. Besides, it is considered that in early lactation the WSW method can generate underestimation of milk production when a single lamb is used, as in this study, considering that in non-dairy ewes there is surplus milk in the udder at the beginning of lactation which small lambs are not able to ingest (1).

The results of the orthogonal regression for both methods showed that the estimation of milk production with SH method is comparable with the measurement by WSW method.

Since estimation of the weekly milk production did not show significant difference between methods and both methods showed a similar coefficient of variation, it is concluded that both methods can be used in hair ewes; however, the authors of the present study consider that the SH method requires less animal management, which support the use of that under experimental conditions.

The first author would like to express her gratitude to the International Center for Development and Decent Work (ICDD-Germany) and to the Consejo Nacional de Ciencia y Tecnologia (CONACyT-México) for the PhD scholarships awarded.